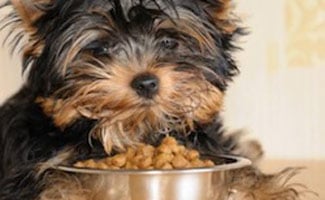 Just like human food, the government does have regulations in place that concern the production of not only dog food, but other pet foods as well. Dog food production is regulated at several levels, including federal, state, and sometimes local levels. However, you have to keep in mind that much of the regulation that concerns dog food is focused on proper labeling and is not monitored on a regular basis unless there is a potential problem.

To understand this, consider the laws about speeding. You are not supposed to go over the speed limit, but there is no one in your car to monitor you. You only get caught going over the speed limit if you leave evidence of it during an accident, or an officer happens to be tracking speeds when you drive by.

For the most part, dog food regulations would not be impacted by local regulations unless it became a health issue. In fact, local regulations concerning dog food are most likely to be concerned only with local building codes and manufacturing location codes than they would with the actual content of the dog food.

All states retain the authority to inspect the plants where dog food is made. States also have their own regulations concerning the content of the dog food, registration of the product before production, and label reviews. States provide minimum standards for dog food manufacturers to meet in the form of percentages required of crude fat, crude protein. They also regulate the maximum amount allowed for crude fiber as well as moisture content.

When it comes to federal regulation of dog food and dog food production, the chore is primarily left up to the Federal Trade Commission and the United States Department of Agriculture. The regulations that are overseen by these divisions are based on the function of each division as it serves the entire population. For instance, their focus is going to be a more generally focused and not always specific to dog food.

The Federal Trade Commission is responsible for overseeing fair trade. As it applies to dog food, the main concern of the Federal Trade Commission (FTC) is basically limited to advertising. They uphold the truth in advertising standards. In other words, the FTC says that whatever the dog food manufacturer or distributor advertises is in the dog food had better actually be in the dog food. Dog food manufacturers also cannot make false claims. If they make a claim about their product, they need to be able to provide evidence for that claim. That is why dog food is not advertised with promises of things like giving your dog the ability to fly or other things that it cannot do. Keep in mind that the evidence that is provided only has to show success. It does not have to show failure. So, if a company ran an ad that their dog food cured cancer, it doesn’t mean it will cure all cancer. It might mean that it cured cancer in one dog.

The United States Department of Agriculture (USDA) is responsible for oversight of things having to do with agriculture and in this case, pet food. This very wide umbrella serves to regulate pet food in a similar manner as the way they regulate human food. The USDA is responsible for regulating pet food ingredients including the amount of meat that must be used, the minimum nutrients contained and what the labels offer.

Labels are not just for looks or just to appease the customer. Federal regulations declare that dog food labels must contain a number of items to be compliant.

Federal regulations are in place to allow for voluntary inspection of the dog food. If the company chooses to request a voluntary inspection and they pass it, they may label their product as such. So if you want to know which companies really care about what they are producing, look for the label that tells you the product has undergone a voluntary federal inspection.

You are probably wondering how it is possible that so many dog foods have been recalled when there are regulations in place to prevent harmful dog foods from ever reaching the consumer. It is important to remember that there are several issues at work here.

For instance, if one production line is found to be contaminated, that may not mean that the entire plant is checked or even that this one single line is checked. Morals would dictate that it be so, but that could mean a loss of profits for the manufacturer. All of the food would have to be either destroyed or checked for contaminants. That doesn’t just mean they lose that food, they also lose the production of the food that was to follow as well as paying for man hours for dealing with the contaminated food. As a result, the food may not be thoroughly checked. In fact, depending on what the accountants say, even some of the contaminated food may be packaged and sold.

It really comes down to numbers. If more money is going to be lost decontaminating the line or facility than would be lost through fines and law suits, it is very possible that the food will be moved on to the market. The cheaper the dog food is, the more likely this is to happen. It is not because the dog food is cheap. It is because they assume that the people who buy the dog food are not putting more money than they have to out for their pet. Hence, they may not even have up to date shots or other medical needs met, which would remove any responsibility the dog food manufacturer has for the health of your pet.