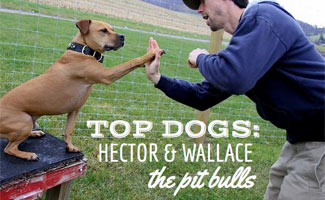 In 2004 Wallace the pitbull was saved from near death at an animal shelter. His breed and high energy level were deemed a dangerous combination and put him on the fast track towards euthanasia. In 2007 Hector was one among many pit bulls saved from NFL football star Michael Vick’s dog-fighting ring in Virginia. Both of these dogs were lucky enough to find people to accept them for who they were and in spite of their past to recognize the big hearts inside and adopt them into their forever homes. Both pups became true ambassadors for the pit bull breed. Wallace harnessed his energetic spirit to become a world-renowned and award-winning Flying Disc Champion, while Hector used his loving ways and gentle spirit to become a therapy dog and spread his sweetness with the world. Sadly, these two awesome dogs have joined so many of our other four-legged pals across the rainbow bridge. But, we were lucky enough to catch up with their pet parents to learn more about how the dogs’ presence in the lives of so many has changed the outlook for pit bulls everywhere. Learn more in the exclusive Canine Journal interview.

How did you first learn about Michael Vick and his involvement with dog fighting?

We heard about it from the media like everybody else. It was all over the press, and was obviously a pretty big deal.

Tell us a little bit about why you decided to adopt Wallace and Hector?

Wallace was in danger of being euthanized at our local shelter, largely due to his breed. He wasn’t an angel at the shelter, but there were other dogs that weren’t angels either and nobody worried about them being a liability. I didn’t like the double standard, so we fought for him and ended up adopting him. We found out he was really good at catching Frisbees, and ended up becoming a National and World Champion Disc Dog (check out his inspirational video below). I saw the impact Wallace had on people in changing their minds for the better regarding pit bulls. I knew a lot of eyes would be on the dogs from the Vick case, and really wanted to give one of them a chance to prove themselves like we did with Wallace. Fortunately most of them got that chance, and we were fortunate enough to let Hector prove that he was simply a good dog in a bad spot.

What was the process like to adopt such high-profile yet potentially “dangerous” dogs into your home?

Wallace wasn’t high-profile at the time we adopted him, but we did have to change our homeowners insurance to State Farm since they don’t discriminate based on breed. By the time we adopted Hector, we were used to being under the microscope, which is why I thought we would be a good fit for adopting one of the dogs from the Vick case. The rescues had to keep the dogs for a certain length of time due to the court case involved, but for dogs like Hector who weren’t as affected by his past life, it was business as usual.

My wife and I knew we wanted a dog, and we knew that there were a lot of dogs at the shelter that needed a home. We simply wanted a pet dog, so figured why not give a dog in need a chance to fill that spot. We knew there were lots of good dogs still there that we couldn’t adopt ourselves, but figured we could at least help them find a home of their own.

If Wallace and/or Hector could say the biggest lesson they learned from their difficult past, what would they share?

Your past is what it is. It’s part of you, and makes up who are right now, but you don’t need to let it define what you can do or who you can become from this point forward.

What are some ways that people can help in the fight against dog fighting? 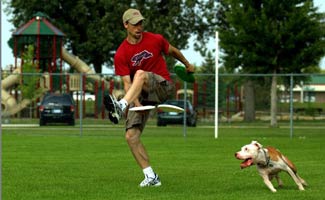 It’s important to report any activity, but it’s also important to understand that many of the dogs in these situations don’t have a choice in the matter. When the dogs are rescued from these situations, they still tend to have a stigma of aggression attached to them, which can make it harder to find them homes. The truth is that each dog is an individual, and while some dogs are more affected than others by negative situations, many are strong enough to go on and live a good life just like any other dog. Hector proved that, and so have a lot of other dogs. It’s really important that people continue to foster and adopt dogs rescued from these situations since they are the real victims in the whole thing.

Why do you feel pit bulls are so misunderstood as a breed?

People have been fed a lot of myths and misinformation. It’s gotten better over the years, and I believe the tide has shifted, but we still have a way to go regarding people stating their opinion as fact. Just because one dog is a certain way, doesn’t mean all dogs with that kind of look similar are that way. Each dog is an individual, and that’s harder to get across to people when they stereotype them.

What characteristics did you find most endearing about Wallace and/or Hector?

They were two very different dogs, and I really appreciated their individual personalities. I had Wallace who was never encouraged to fight other dogs, but was not good with them. Then I had Hector who grew up in that environment, and was able to live with our other dogs and be dog social otherwise without an issue. Definitely a lesson in judgement there.

What were the dogs favorite toys?

Wallace obviously like his flying discs, but he loved toys in general, so his favorite would probably be whatever one he had at the time. Hector wasn’t big on toys. He was more of a bake in the sun kind of guy.

You can keep up with us on Facebook at Facebook.com/wallacethepitbull and Facebook.com/hectorthepitbull. Check out the book we wrote Wallace: The Underdog Who Conquered a Sport, Saved a Marriage, and Championed Pit Bulls — One Flying Disc at a Time. We’ve recently started Wallace the Pit Bull Foundation to continue to help homeless dogs in their honor. Visit to learn more and consider donating for a great cause. You can make a difference – and so can your dog!