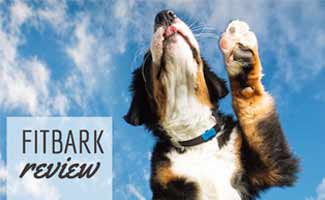 What started as a Kickstarter idea in the Summer of 2013 by a brother and sister team has quickly become a successful product sold worldwide to tens of thousands of pet parents. Canine Journal recently got the chance to chat with FitBark’s co-founders and test out the product (they gave us one so we could see if it held up to all the bark). We wanted to share the story with you along with our in-depth review of this top pick from our best dog activity tracker review.

Background and History of Fitbark

A relatively new concept, the idea for FitBark came about when Italian siblings Sara and David were thinking about how to measure their dog’s health/activity against other dogs. There didn’t seem to be any tracking, metrics and/or benchmarks to compare against, so they used FitBit as a solution to capture and record data they could then serve back to other pet owners, vets, researchers, etc.  Since it is not financially practical for vets and clinics to sell a device like FitBit, and there would be no way to compare canine data in isolation, Sara and David thought that having a product that was mass-produced at a more affordable price would help them gather the data they desired to compare and track dog activity.

The product was originally funded through a successful crowd funding campaign on Kickstarter. They then aligned with the right advisers and built a small but solid team of engineers to help bring their vision to life. Although the hardware is very similar to the original prototype, the software is constantly being upgraded and updated. Having built a solid hardware product, the software is more fluid and thus easier to make changes to. FitBark looks to its customers for input because this loyal group of users constantly provide feedback on possible improvements and new features. Co-Founders Sara and David talk to customers directly and remain available and approachable for their customers.

Since its creation, the team has moved their headquarters from Italy to New York City to Kansas City, where they currently reside. They have found Kansas City to be a great start-up community because of its vast startup resources such as Google Fiber and the Sprint Accelerator – an office space for other tech start-ups and entrepreneurs. The product is made in the USA (manufactured in New Hampshire) and FitBark hopes to keep production in the States as long as possible.

FitBark is a small bone-shaped device you clip on to your pup’s collar that monitors the behaviors of your dog. It captures data that it compares with other similar dogs to help you know the norms of your dog’s age and breed. If there is a change in behavior, you will know, and can have the dog examined. This may allow for illnesses to be discovered earlier. If your dog is being watched by a pet sitter or walker, you can make sure your pooch is getting enough exercise. It’s a small investment that will encourage more exercise and could add years to your dog’s life. You can charge it without removing the FitBark from the collar, and each device is equipped with Bluetooth 4.0 that syncs whenever it’s next to your smartphone. Simply input your dog’s basic info, select a lifestyle for your dog, and it will give you endless feedback and “BarkPoints” based on statistics from similar dogs.

In November 2017, FitBark released a newer FitBark 2 model. Nearly identical in shape, size and features, the biggest improvement is to the battery life, now up to 6 months and has removable color cases to switch out styles (sold separately). The original is being transitioned out but the new version works with their existing WiFi base station (optional).

Our Experience with FitBark 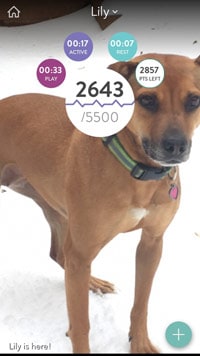 The founder of this website, Michelle, recently got a free FitBark from the company to test with her dog Lily. Owner and dog have been hard at work testing the product. Here’s what Michelle had to say:

We have two dogs but Lily is the one always running around the yard and getting into trouble with the wildlife. So we thought it would be interesting to see how her activity tracks throughout any given day using the FitBark. We have only had it for about a week, but Lily has exceeded her activity goals every day so far, and the well-designed smartphone app keeps us current on her activity and rest for every hour of the day. It is really neat to see how often she plays vs. is mildly active and it even surprised us to see that one night she did not sleep so well. An added bonus, that we had not anticipated, is that when Lily’s activity was pacing below her goal for the day, the app sent a notification to let us know. That motivated us to take both dogs on a walk right away. So, the activity monitor is encouraging its owners as much as its wearer (maybe more so, ha!) to be more active. – Michelle, February 18, 2016

Of course, don’t take it from us that FitBark is a great investment. Check out what some of its users had to say!

I’m loving the Fitbark with my new rescue dog. First, it’s really getting me to pay attention to the exercise he’s getting and motivating me to get him out for hikes, jogging, playdates, etc. This in turn is actually getting me much more active then personal activity tracker ever did. I also love the ability to benchmark and see how other dogs are doing and now have friends and family’s dogs on the app as well. An interesting benefit to showing the activity throughout the day is I could tell when the he escaped from his crate to go running around the house! Since he did no damage after being out for a couple hours, I’m no longer crating him. Bonus for him 😉 . The FitBark is simple to set up and the app has a great user interface. Get one for your dog and get the both of you more active. – velobob, Best Buy 12/17/2015

Loved this product for the first 3 months. Stopped charging and unable to use within months of purchase – Ctina1198, Best Buy 12/9/2016

Learn more about how the FitBark works and see some of its many features in the Kickstarter video below.

A Healthy Dog is a Happy Dog

Now that you know more about FitBark, it’s time to get started with your dog’s new healthy lifestyle. FitBark’s dedication to improving dogs’ health and their passion for sharing and using the doggie data can help you better understand your dog’s health. This story shows how a small idea can grow into a big brand, and a small addition to your dog’s collar can make a big difference in the long-term health and well-being of his or her life.

Are you inspired to get more active with your dog?

Sadie graduated from the Moody School of Communications at the University of Texas at Austin with a Bachelors's in Advertising and a minor in Business. Her love of pets started from an early age with her childhood cocker spaniel, Peanut, and cats Lucy and Tabby. She is currently a dog mom to Georgie, a Cavalier King Charles Spaniel. She has been covering dog-related topics since 2012 and is proud to share her latest personal experience, resources, and information with fellow pet parents. Her expertise has appeared in many notable media outlets, including The New York Times' Wirecutter, Forbes, People, Reader's Digest, Apartment Therapy, and other regional news organizations.