So what makes this Canadian breed so popular? A wide array of physical and mental characteristics make the Labrador retriever a favored choice, and let’s not forget those big friendly brown and hazel eyes!

The Labrador Retriever is not the only dog to share this ancestor. The Flat Coated Retriever, the Chesapeake Bay Retriever and the Golden Retriever, all share the St. John’s Water Dog in their lineage.

The Labrador also managed to continue the retrieval skills of the St. John’s Water Dog including pulling fishermen’s nets in from the water.

What Did Its Ancestors Do?

How The Labrador Retriever Came To Be

It was upon bringing the Labrador Retriever back to England that the breed found its official ancestry with the breeding program implemented by the Duke of Buccleuch. It is ascertained by Labrador aficionados that the modern day Labrador has its roots with the two dogs given to the Duke to assist in his program: Avon and Ned.

The Labrador Retriever was particularly favored by fishermen and hunters alike for its smooth and short coat. In contrast to the smooth short coat of the Labrador Retriever, the Newfoundland (also stemming from the St. John’s Water Dog) had a thicker and wavier coat which tended to trap ice and weigh the dog down in the water.

In current society it is often believed that there are two different breeds, however, this is not the case. The Labrador Retriever does have two different lines, a conformation line (“English“, “Blocky Headed,” “show” or “bench” Labs) and a field line (“American” or “working” Labs).

The shorter and stockier conformation line of Labrador Retrievers have blockier heads and are generally used as show dogs (it should be noted that this is not always the case and field lines can also be shown per the AKC breed standard.)

The taller and lighter field line of Labrador Retriever is more slender than its counterpart and is generally used for field work (again, it should be noted that this is not always the case and conformation lines can also be used as working dogs.)

As the Labrador Retriever breed began to get its start it was black. As breeding programs continued, there were occasionally yellow and chocolate puppies but due to the breed ideal at the time being for black puppies these outcasts were often removed from litters and future breeding programs.

Everything about the Labrador Retriever that is known and accepted as the breed standard today derives from its origin as a water dog, particularly its water repellent coat as well as its other specialized physiological features. 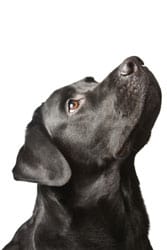 The Labrador Retrievers coat should not be curly by breed standards and, although it is permissible to have a wave down the back of the coat, generally the hair lies flat.

The slightly oily coat leads inexperienced owners with the impression that their dog needs bathing but the oiliness is natural and protects the skin.

Webbed toes are usually found on dogs that were bred out of retrieving stock. Webbed toes assist dogs who work in the water to efficiently paddle through the water quickly.

The Labrador Retriever is known for having a “bull neck” – a neck that is wide and muscular. The large thick neck was a useful trait when the dogs were used mostly for hauling fishing nets back to fishermen’s boats.

These days the Labrador Retriever is still expected to have a thick and muscular neck; however, for most dogs it serves little purpose as they no longer work such laborious duties.

While the colors of their coats may change the standard for the size and weight of the breed does not. According to the American Kennel Club’s regulations, the Labrador Retriever should measure in at the withers at 22 ½ to 24 ½ inches tall if it is a male and 21 ½ to 23 ½ inches tall as a female.

The weight class for male dogs is 65 to 80 lbs and for females is 55 to 70 lbs. The Labrador Retriever is a rather large breed and is also commonly known for having a knot (also called a “knowledge bump”) on the top of its head.

How Smart Is My Lab?

Labs actually ranked as the seventh most intelligent dog breed, so you count on them to learn quickly and stand out in obedience training, especially when treats are involved!

Though the Labrador Retriever is a particularly smart breed of dog the idea that this knot is related to the amount of knowledge that a dog picks up is simply a myth. This large bump on the dogs head is actually the occipital bone which can be more prominent in both breeds and individual dogs.

There is some argument among fans of the Labrador Retriever breed that certain lines of Labrador Retriever’s or even certain colors have better temperaments than others. This is simply not true. A dog’s temperament depends very much on its genetic makeup, its individual upbringing and its medical soundness.

Overall Labrador Retrievers are known for being well-balanced and friendly dogs. They possess the skill and versatility to be working dogs as well as service dogs and just good companions. Unlike some other breeds the Labrador Retriever is not well known for being territorial, aggressive or nervous and they are “pleasers” by nature which makes them particularly adaptable as dogs who serve their communities.

Labrador Retrievers are generally food and praise driven dogs and combining this fact with their incredible intelligence, they make the perfect candidates as working dogs.

Working dogs can perform a variety of different duties that help the community. Or can simply participate in activities for the thrill of the game!

Labrador Retrievers also thrive when challenged with activities to keep their minds busy. Such events may include Dock Diving, Hunting And Retrieval, Agility, Flyball, and even Dancing!

Regardless of what job a Labrador Retriever takes part in, this working breed is always up for a good challenge. A challenged dog is a tired dog and a tired dog is a happy dog.

Watch as this dock dog performs at a competition.

We did not have pet insurance with our first dog and we paid thousands out of pocket for 3 ACL surgeries and treatment for Addison’s disease. We learned our lesson and this time got Fetch insurance from the moment we brought Macy home. Two years ago, Macy had ACL surgery and we were reimbursed $2,700. Now, she tore her meniscus and had a $3,200 surgery. Fetch reimbursed us $2,994.20 for that latest surgery. We are so happy we chose to go with Fetch. The process is easy and they really seem to care.

Is A Lab Retriever The Right Dog For You?

The Labrador Retriever is not the right breed for everyone. If you’re looking for a dog to lounge around all day, this is definitely not the breed for you! But if you are looking for a dog who will provide companionship on your daily walks, a good laugh or two when that huge otter-like tail sweeps everything off the coffee table and a wow of amazement as it retrieves that ball for the fiftieth time, then the Labrador Retriever could be the right dog for you.

This is an eager to please and loyal dog. If you are willing to give the Labrador Retriever the stimulation and exercise it needs to stay healthy and avoid boredom, then you will have the ideal companion. What happens if you can’t keep a Labrador Retriever exercised and mentally stimulated? Well, you may find them creating their own game using your couch cushions and… well, anything else they discover. 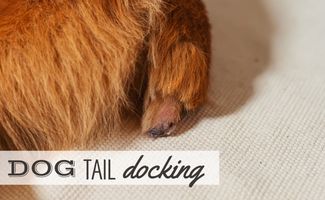