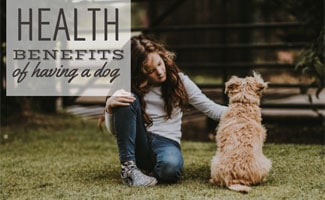 There are many benefits to owning a dog that go far beyond them just being cute. Dogs can improve our overall health and help us live happier lives. Below are some of the many benefits that humans receive by spending time with our beloved canines.

Depression affects roughly 40 million adults. Did you know that owning a dog can help you be happier? Dogs reduce depression and improve your all-around health (as you’ll read below). Many of the items we discuss in this article are proven to help reduce depression as well (more exercise, less loneliness, reduced stress).

According to a Wisdom Panel Survey, 99% of dog parents (and 96% of cat parents) said their pet has positively impacted their mental health.

Get Over Rejection Sooner

A study in the journal Anthrozoös asked volunteers about an experience where they felt rejected and then asked them to name a photo of an animal, toy or human. Those who named an animal or toy felt less negatively than those who named a person.

People who treat animals or objects like people are more likely to be empathetic and also avoid negativity better. So next time you talk to your dog, know that it’s a good thing and it can help you deal with rejection.

You know your dog needs exercise to be healthy. Spending time at the dog park or walking on your favorite trail are just a couple of ways your pup can stretch its legs. If your dog is getting exercise, that means you’re out and about as well. A Michigan State University study found that those who live with a dog exercise about 30 minutes more per week than those who don’t own a dog.

A study in Aging & Mental Health states that older adults who own pets are 36% less likely to say they’re lonely than those without. Loneliness is connected to heart disease, Alzheimer’s disease and other health risks. Is it safe to say that minimizing loneliness could help you reduce disease and other illness? It certainly seems worth a try, right?

After 15 to 30 minutes of petting a dog, female volunteers had lower levels of cortisol (a stress hormone) and had a higher level of oxytocin (a happy hormone) after another 1 to 5 minutes. Petting dogs has been shown to lower heart rates, as well.

Keep Your Wits About You

Research from Anthrozoös stated that older, housebound adults who owned dogs or cats were better at paying attention, remembering details and using past experiences to decide how to act than those who didn’t own a pet.

Being around a dog may mean you take fewer pain medications. A study in Anthrozoös states that adults who spent 5 to 15 minutes with a dog after surgery used fewer pain meds than those who didn’t.

Babies who grow up in homes with pets are less likely to develop allergies later in life. The study found that children less than 1-year-old were half as likely to be allergic to the type of animal in their home than those who grew up without a pet in the house. This doesn’t work later in life though, early exposure is key.

A study found that seniors on Medicare who own pets had fewer doctor contacts within a 1-year period than those without pets. This was especially true of dog owners more so than cat, bird and other animal owners.

Additional benefits of owning a dog include a decrease in your blood pressure, cholesterol levels and triglyceride measures. Lower amounts of these things contribute to improved health.

What health benefits do you notice from being around your dog?