Michelle is the proud co-founder of Canine Journal and a dog lover through and through. She oversees the business's day-to-day operations, insurance, and marketing and brings over two decades of corporate business experience. Michelle is a licensed insurance professional and holds an MBA from Vanderbilt University. She is a member of Dog Writers Association of America and her expert advice and opinions have appeared in outstanding media outlets, including Newsweek, The New York Times' Wirecutter, Forbes, People, Reader's Digest, and more. Michelle led strategic planning, marketing, and growth efforts for national brands including Bank of America, Mattel, Hanes, and licensed products including Harry Potter and Batman. However, her first job in the canine field started in 1999 at a dog bakery! Since the day she was born, Michelle has lived in a home full of dogs. Her adult home in North Carolina is no exception, where she and her husband (Alex) live with Lily and Barley, their two adorable rescue pups. Her favorite moments include walks in nature with the dogs, watercolor painting, practicing yoga, traveling the globe, and dancing her butt off at Jazzercise. Seeing your dog in a life-threatening situation can be a frightening and stressful experience, especially if the dog is unresponsive. Equipping yourself with the knowledge to effectively recognize and take action treating your dog’s condition can keep you calm and greatly increase your dog’s chance of survival.

Pancreatitis, or inflammation of the pancreas, is a painful affliction that affects dogs worldwide. While spontaneous canine pancreatitis is not particularly well understood, veterinarians do have an idea of the causes that contribute to this condition, its related conditions and symptoms and treatment options to lessen symptoms. 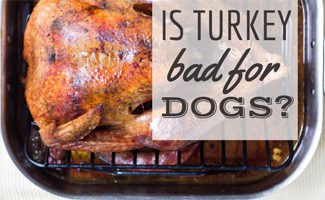 It’s tempting to slip Fido a piece of Thanksgiving turkey or lunch meat, but could turkey harm your dog? Learn the answers and some alternatives. Also, enjoy a yummy turkey treat recipe to make with your Thanksgiving leftovers. According to the American Kennel Club (AKC), the top 10 AKC most popular dog breeds have varied a good amount during this century so far. However, the Labrador Retriever always comes out on top. The French Bulldog is quickly rising to the top of the list coming in at number two in 2020. The German Shepherd has a steady hold in the top three. And watch out, Golden Retriever, the Bulldog and the Poodle are right behind you. There are also some newcomers to the list, including smaller toy breeds like Dachshunds and Corgis. The Beagles are losing popularity over the years too. See the trends over the years, including 2002, 2007, 2011, 2014, 2018, 2019, and 2020 in the United States. Did your pet eat chocolate or get into the antifreeze in the basement? Act quick! It’s toxic and you need to breakout the poison patrol actions ASAP. But what do you do? Here are the five steps you need to take to get started treating a poisoned dog… When you have to go on vacation, there are only three options for your furry friend: Take him with you, board him or hire an in-home pet sitter or walker. Read our tips… Yes, your pup will look super cool during dog day at the ballgame or on your couch sporting your NFL colors from your favorite team… Valentine’s Day is a time to shower your pup with love and affection. But February is also devoted to raising awareness for the importance of spaying and neutering our pets. It’s also an excellent time to think about what might make a good gift for your pooch during this love-filled season. I was rushing my dog to the emergency veterinarian. All I knew is that she had ingested part of her Nylabone. I just wanted her to feel better. Was it as simple as letting it pass through her? Did she need medication? surgery? I had no idea what was in store for us… Miniature dogs meet many unique family needs. Whether living in an apartment or looking for a dog that isn’t too large to knock down young children, miniature dog breeds are often a better choice for some families. Below we will take a look at some of the more popular miniature dog breeds including: the Chihuahua, the miniature pinscher, the Italian greyhound and the cavalier King Charles spaniel… While working from home during the pandemic, owners got to spend more time with their dogs. But now, as people return to work, their pets will have to readjust. This readjustment may reveal newfound separation anxiety. More than a quarter of dog owners are worried that their canine companions will suffer separation anxiety when they return to work, and some are even willing to take a pay cut to continue working from home. With so many dog owners in the U.S. returning to work, perhaps it’s time to reexamine the benefits of dogs in the workplace. If you’ve run into financial troubles, you may be worried about how you can pay for veterinary care for your pet. You don’t want to have to sacrifice your pet’s health if he becomes ill or injured. So what can you do? If you need help with vet bills, we’ve got some tips for you. We suggest looking into resources in your area if your pet is ill or hurt and you can’t afford to treat him as you may have in the past. Below is a list of some national organizations and charities for help with vet bills. But be sure to check for local resources on the internet, through your vet, and also local colleges and universities. You may be surprised to find just how many people are willing to help care for your pet in your time of need.