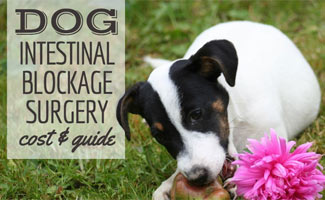 Is your pup a big-time chewer? If so, there is a chance you may have to face emergency surgery one of these days. All it takes is your dog ingesting one small toy or sock to cause a serious blockage in his gastrointestinal (GI) tract, which can lead to major surgery and astronomical medical bills.

What Causes Intestinal Blockage In Dogs?

Gastrointestinal (GI) obstructions are a common occurrence in dogs because they love to chew on foreign objects and inevitably end up swallowing something they shouldn’t. Puppies (aka chewing machines) are particularly prone to this condition.

Although not as common, other causes of GI blockage include tumors, GI inflammation, intestinal parasites, or twisting of the intestines.

What Are The Symptoms?

If you think your dog ingested something suspicious, or he’s exhibiting the following symptoms, call your veterinarian as soon as possible.

If you notice any of the symptoms above, it’s important to visit your veterinarian immediately. Your vet may perform an endoscopy, a procedure that involves inserting a small tube with a tiny camera attached through your dog’s throat and into the stomach.

In some cases, a vet can retrieve the foreign object during the endoscopy. If not, your vet likely will use an ultrasound or x-ray to determine where (and what) the obstruction is. Part of your vet’s dog intestinal blockage treatment may include giving him IV fluids if he’s presenting symptoms of dehydration.

If the object does not pass within 72 hours of suspected ingestion, your dog will need further evaluation. However, if your vet determines that the foreign object presents an immediate danger, emergency surgery is in order.

What To Expect From Surgery

Dog intestinal blockage surgery is major surgery requiring your dog to go under anesthesia and be hospitalized for 2 to 4 days. The surgeon will make an incision into your dog’s abdomen near the site of the blockage and carefully extract the object. He also may need to repair any damage to the stomach or intestinal wall that resulted from the obstruction.

The following video gives you horough information on what to expect from treatment and surgery. Use viewer discretion, as some images are graphic.

After surgery and hospitalization, monitor your dog and keep his activity level very low. Stick to short walks for at least a week — you don’t want his sutures to tear. He’ll also need to wear the dreaded cone to keep him from chewing on his healing incision.

During this time, it’s also important to feed him small amounts of bland food before gradually transitioning to his previous diet. Make sure he’s getting enough fluids to prevent dehydration.

How Much Does Dog Intestinal Blockage Surgery Cost?

The cost to treat intestinal obstruction ranges anywhere from $800 to $7,000.1 The cost depends on how extensive the damage is, the length of his hospital stay, the types of medications required and other factors.

How Can You Reduce The Cost?

Getting pet health insurance when your dog is young is the best way to plan for health problems throughout his life. Signing up while he is young also brings the overall cost of the dog’s emergency care way down, because there are far fewer pre-existing conditions.

Having pet insurance before a diagnosis can help minimize unexpected expenses for emergency surgery and a host of other pet health expenses. It’s not as expensive as you might think; however, you must have an active pet insurance policy prior to diagnosis for the condition to be covered.

Several reputable pet insurance companies can help offset a majority of your pet’s unexpected health expenses. Our top recommendation is Healthy Paws for their excellent coverage and service.

Below, read one Healthy Paws customer’s testimonial about her experience with her lab, Jude, who required emergency gastrointestinal blockage surgery after swallowing the squeaker from its squeaky toy.

“We had three labs prior to our current guy Jude and didn’t have pet insurance for any of them. After our yellow lab had three knee surgeries in the last two years and crossed the rainbow bridge in June 2017, we’d spent close to $15,000 out of pocket to care for him. So, we enrolled our new puppy, Jude, in Healthy Paws Pet Insurance immediately — we knew we couldn’t afford those costs again.”

Shortly after Jen adopted Jude, they started showering him with toys. “We bought him a squeaker toy, and he ate the squeaker right out of it! He wasn’t trained very well with the ‘leave it’ and ‘drop it’ commands,” Jen says.

To avoid a similar situation in the future, she cut open the other toys to remove the squeaker, but Jude stealthily grabbed the other squeaker: “He took [the squeaker] right out of my hand! I still had my fingers on it, in his mouth, and he still just sucked it down! It was like a vacuum!”

“A week later he started vomiting and having diarrhea,” Jen continues. After a trip to the emergency vet, x-rays and ultrasounds showed not just a squeaker, but also fabric.

“The surgeon called, and there were two pairs of underwear — one of mine and one of my husband’s — and the two squeakers! We had no idea about the underwear or when he got into them!”

Jude’s intestinal blockage and emergency surgery totaled $4,734, of which Healthy Paws reimbursed $4,201 (figures correspond to pet parent’s 90% reimbursement level with a $250 annual deductible plan). Jude has since recuperated and is back to chewing — not swallowing! — many of his fun, furry toys.

If you’ve never had pet insurance before, there’s a lot to learn to make a wise choice. Before seeing our reviews of the best pet insurance providers, you may want to check out our pet insurance guide, which includes everything from insurance terminology and coverage details to cost comparisons.

What kinds of objects does your dog love to chew?

Sally holds a BA in English from James Madison University and began her 25-year writing career as a grad student at the UNC-Chapel Hill School of Journalism & Mass Communications. She’s been a pet parent since college years (and spent her whole childhood with pets). Her work has appeared in many notable media outlets, including The Washington Post, Entrepreneur, People, Forbes, Huffington Post, and more.