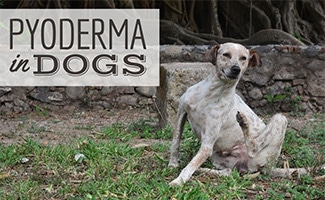 It can be unnerving to see your pup with patches of irritated skin and bumps. If you don’t know what you’re looking at, you definitely won’t know how to deal with it. Pyoderma could be the culprit, so you may want to familiarize yourself with this condition. Understanding the causes and symptoms may help you make the right decisions for your dog’s health.

Pyoderma is a bacterial skin infection that literally means “pus in the skin”. It appears as small, raised, red bumps, some with pus in them (or pyogenic), that look a lot like pimples. You may also notice scaly, dry, flakey patches, redness, and inflammation.

This infection is sometimes compared to impetigo, mainly when referring to puppies. Impetigo is a skin infection common in human children, and the main difference is that impetigo is contagious, while pyoderma is not contagious.

There are two types of pyoderma in dogs:

1. Superficial Pyoderma: When the infection gets into the first epidermal layer of the skin, just below the surface and the hair follicles, it’s superficial. This type is the most common form of pyoderma.

2. Deep Pyoderma: This type of infection gets into the root of the hair follicle. When this occurs, it can be harder to treat.

Where Does Pyoderma Appear?

A dog can have pyoderma anywhere on his body. However, here are some places where a deep infection is more likely to occur:

What Causes Pyoderma In Dogs?

Pyoderma is usually a secondary infection, which means something else causes the skin to be irritated or broken. Then the bacteria get in the skin, causing pyoderma. Some of the reasons that the skin may be susceptible to an infection include: 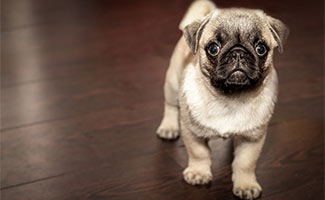 Puppies have extra sensitive skin that’s more susceptible to skin infections, which is why puppy pyoderma can occur. The main difference with puppy pyoderma is the underlying cause of it is just being a puppy.

Puppy pyoderma is most common in areas where the skin doesn’t have hair to protect it, especially their super cute, soft belly. This form of pyoderma looks similar to adult pyoderma but usually requires less intervention to treat. If your vet decides medication is necessary, they may only recommend a topical spray or ointment as needed.

Most vets can diagnose pyoderma by looking at the signs and symptoms. However, they may also need to take a skin sample to examine under the microscope to look for bacteria. Sometimes they’ll do a fungal test to rule out other things like ringworm.

An essential part of the diagnosis also involves determining the underlying cause. Your vet may conduct various tests and blood work to get to the bottom of it.

There are a few ways to treat pyoderma in dogs. Just remember, it’s always smart to check with your vet before using any treatment or home remedy.

Because pyoderma is a bacterial infection, your vet may prescribe antibiotics. Amoxicillin, cephalexin, and clindamycin are common prescriptions for this type of infection. The typical treatment time is three to four weeks but can be extended to eight to twelve weeks if necessary.

Topical treatments your vet recommends may include sprays and medicated shampoos that treat and soothe bacterial skin infections. These include products like:

How To Use Apple Cider Vinegar To Help

This five-minute video from All Natural Home talks about how apple cider vinegar helps relieve itching and how to mix up an easy solution to use.

The Cost Of Diagnosing And Treating Pyoderma

Diagnosing and treating pyoderma can be expensive. It would be wise to explore whether pet insurance is worth it for your pet while he is young and healthy. If they develop an ailment before you start coverage, any pre-existing conditions may prevent the insurer from covering related expensive medical needs later in life.

About The Author: Julie Fritz

Julie is a writer and researcher for Canine Journal and the team's dental expert. With over 15 years in the dental field and her love of human's best friend, she has found a unique passion for learning all there is to know about dogs' dental health and brings that knowledge to our readers. She also enjoys writing in-depth breed-specific articles and researching products and information to help pet parents care for their pups.

Growing up, she enjoyed living in a house that always had a Brittany Spaniel and is very happy now when she gets to spoil the dogs in her life with love and snuggles. Her professional writing career began in 2012, and today, she enjoys writing about a variety of things, from blogging about her family to informative articles about dogs, technology, events, and healthcare.

In her free time, you might find her hiking, trail running, biking, or swimming. You might also find her in the kitchen, where she loves to cook and bake for her family and friends.

Disclaimer: Information regarding insurance company offerings, pricing, availability, and other contract details are subject to change by the insurance company at any time and are not under the control of this website. Information published on this website is intended for reference use only. Please review your policy carefully before signing up for a new insurance contract or any other contract as your unique circumstances will differ from those of others who may be used for example purposes in this article.
We are a participant in the Amazon Services LLC Associates Program, an affiliate advertising program designed to provide a means for us to earn fees by linking to Amazon.com and affiliated sites.
Disclaimer: The information provided through this website should not be used for diagnosing or treating a health problem or a disease. It is not a substitute for professional care. If you have or suspect you may have a health problem, you should consult your health care provider.