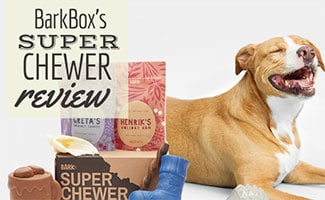 Are you tired of spending money on new toys for your dog only to have her tear them apart within 10 seconds? BarkBox offers a Super Chewer dog subscription box for pups who need tougher and more durable toys. Find out if the Super Chewer box can help your dog’s playtime last longer. 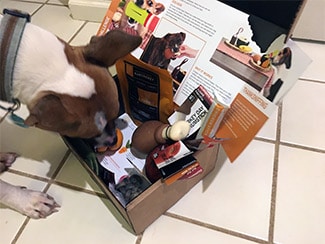 No promo code needed just use this link and click on "claim offer" to take advantage of these offers. You can also visit our dedicated BarkBox coupon code page.

What Do People Think?

Molly was chewing the toys in the beginning, the customer service team gets an amazing review from me moving her to a super chewer and fixing the problem! She got replacement toys, and now she gets only toys in her box monthly! Molly looks forward to the mailman to bring her bark box monthly??? They get 5 stars from us!! – Gayle, Consumer Affairs 6/14/2019

We rescued our 50lb pittie, Hershey from a city shelter. She’s in the prime of her life, maybe 3-4 years. She can go through a toy in seconds, minutes if it’s a little tougher than normal. But with Super Chewer, she gets spoiled monthly! She always loves everything in her package, and for the price I feel it is definitely a bargain on my wallet. She gets 2 decent sized bags of awesomely flavored treats, including flavors like pork, lamb, all kinds of vegetables and she gobbles them up pretty quick. The ingredients are superb! No fillers or fake junk in these! – Brittney, Consumer Affairs 3/22/2019

Okay, I made a mistake not reading everything through when I subscribed, including that there was no trial period. I subscribed for a box a month for 6 months. First box cost $8 and the other 5 cost $35 each. I thought I could cancel at any time but I can’t. But my big problem is that every toy they sent me so far is way too big for my little 14 pound terrier. He can’t even get them into his mouth to chew and is not even interested in them. He is an avid chewer, a super chewer if you will. I have to buy small and x-small toys for him for Petco and online stores. – Susan, Consumer Affairs 3/21/2019

The treat ball was not super chewer quality. My dogs were able to open it up in less than 5 minutes and ended up destroying the top black rubbery portion of the ball quite easily. Typically your super chewer toys can be damaged and marred but are still usable. We still have the original toys from the first super chewer box that came in October. Was very disappointed with this treat ball. – Jodene, Consumer Affairs 1/26/2019

How BarkBox Makes Its Toys

BarkBox makes all of its toys in-house; see the process below. It’s actually pretty cool!

Super Chewer vs The Competition

What types of toys work best for your dog’s chewing habits?

Kimberly received her Bachelor of Arts in multimedia journalism from Simpson College. She has been writing about dogs since 2014, covering subjects such as dog insurance, training, health, accessories, and more. She is a member of Dog Writers Association of America, and her work has appeared in many notable brands, including The New York Times' Wirecutter, Reader's Digest, Forbes, People, Woman's World, and Huffington Post.