Has your dog developed a terrifyingly aggressive behavior? Get a professional trainer’s help with tips on how to stop a dog from biting.

Dog trainer Amy Robinson grew up watching Lassie movies and parlayed her passion for dog smarts into a twenty-three-year dog training career. She is the creator of the award-winning Drool School DVD and lives with her husband and certified Therapy dog, Mac. You can read more about her on her blog.

How To Get A Dog To Stop Biting?

A reader wrote us this question:

We are having a little trouble with our dog Baker. We have had him for 4 years. About 3 years ago, when he nipped at a 5-year-old kid, there was food around as well as a couple of other kids close to him, but I was not right there to know what happened. We sent him to a trainer for a 3-week boot camp. He definitely seemed much better with regards to listening to us and his training, but we didn’t use the e-collar the trainer used.

We see his protective nature at times, so we try to always remove him from being around when our kids have friends over, and the energy is high. During holiday gatherings like Easter, etc., we’ll put him in our bedroom where he just chills. He also will listen well if we ask him to come lay down near us if my kids’ friends are over and I am sitting at the kitchen table.

This weekend we had a new babysitter. Baker was close to her, like trying to figure her out at first. But he didn’t seem much different with her than any new person coming into the house. The kids said they were coloring on the floor when the sitter just pushed Baker to move him along, out-of-the-way, and he turned and got her on the lip. Our sitter is 13 years old, so he obviously still felt her to be a threat of some kind. We need to mitigate this situation.

Our ultimate goal would be never to have to worry about him biting another person again. On the flip side, I would prefer not always having to place him in a crate or the bedroom when people are here. What I am looking for is can he be rehabilitated/helped and not feel like he is so threatened. We do not want to always have to protect our children’s friends or people who interact with him.

Amy’s Answer: How To Train A Dog Not To Bite

I’m sorry you are having trouble with him. Thanks for all the background; it helps us understand Baker and make a plan to change his outlook. From just the photo you sent, I see a problem here. First, he is on your bed. I think this sends the message that you are not in charge. 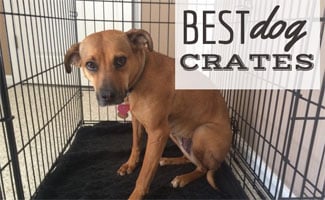 Whenever I work with a dog that asserts himself, the first thing I advise is to take away some privileges. Set up a crate in the bedroom or a gate that would allow him in the bathroom, but not the whole bedroom. He should accept a crate as long as it is close to your bed.

The next part of your story that made me prick up my ears was the last portion about the 13-year-old babysitter. You mention he was “trying to figure her out” and that she pushed him, and he bit her on the lip. Was he on the sofa at the time or the floor? That matters. Suggesting he was “trying to figure her out” and saying “he didn’t seem much different with her” than any other visitor tells me he is regularly allowed to assess new people and situations and then make a decision. In this case, a bad one.

It seems Baker is deciding about people and then acting out toward them if they commit an error of some kind, like push into “his” space or even just get up and move around a room. It may not be all about protection. He may guard a perceived piece of territory and/or feel insecure. In my experience, you can change his behavior by using a leash in the house. That means he isn’t free to block someone’s path or lash out as they pass.

Baker would simply be under your control, just as you say he is when you sit at the kitchen table and call him over, only now you are using a leash as insurance. Act casually and use treats to ask for easy commands like sit and down. He should know these from his former training. Take him everywhere you go in the house. Instead of allowing him to stake out an invisible territory, you show him where to sit on the floor. Then sit on the sofa near him. Praise him for good behavior.

Take away his old habits by changing everything drastically. Before, Baker was allowed on the bed and sofas. Now he will still get positive attention but on the floor. You will still be your normal cheerful self with him, but now it is a boss-employee relationship. He works for you. When you can’t watch him, put him in the bedroom.

Also, walk him a good distance two times per day and incorporate easy commands into your walk.

Keep this up for at least two to four weeks, and I think you will find he is happy to let you be the leader and will be much less likely to lash out. Why should he, when you are making the decisions? You have had him for four years, so he developed these bad habits over time. You can largely undo them with consistency, guidance, and management.

One caveat, your sitter is young and I would not assume that anyone other than you and your husband could be the leaders. While you certainly don’t want to crate him all the time, you will want to set him up for success. Baker should be crated or gated when the sitter is there without you, period.

Turn the tables on your assertive dog. Do not pet or praise unless it is in response to a command he has performed for you. A simple sit will do. Being attentive only when he is well-behaved sends the right message.

While your puppy may just be play biting, encouraging this behavior could lead to more serious incidents down the road. Take a look at this video for tips on how to curb biting before it starts.

Thanks Amy for sharing your advice and hope that helps Baker and other dogs who have similar tendencies. If you’re still having trouble, you might consider getting a professional’s help, in your local area or using this respected online dog trainer. A muzzle could be a good preventative tool and you might also consider applying for dog liability insurance to protect your wallet in case these bad behaviors rear up again.

Has your dog ever bit anyone or another dog? If so, what did you do to promote better behavior in the future?

About The Author: Amy Robinson

Amy Robinson grew up watching Lassie movies and parlayed her passion for dog smarts into a twenty-two year dog training career. She is the creator of the award-winning Drool School DVD and lives with her husband and certified Therapy dog, Mac. You can read more about her on her personal blog at: www.DroolSchool.com

Disclaimer: Information regarding insurance company offerings, pricing and other contract details are subject to change by the insurance company at any time and are not under the control of this website. Information published on this website is intended for reference use only. Please review your policy carefully before signing up for a new pet health insurance contract or any other contract as your unique circumstances will differ from those of others who may be used for example purposes in this article.