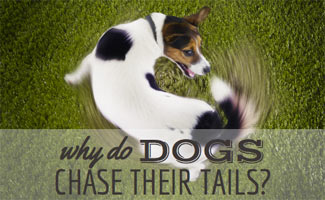 Our dogs are weird. Some of them can’t help but jump up in bed with us in the morning and give us a tongue bath, while others want nothing more than to take a toy and shred it into a million tiny fibers and decorate your floor (and how proud they seem to be when they’ve finished!).

Some dogs chase their tails. The image of a dog spinning like a little tornado has been shown on TV, in movies and is about as normal of a phenomenon as leaves regaining their spring color or cars buzzing down a busy street.

But why do dogs chase their tails? The answer is equal parts scientific and hereditary, and each dog might have a different reason he will spend his free time trying to catch that hairy thing that follows him around all day. Let’s find out why a dog chasing tail is so fascinating.

What Are Dog’s Tails For?

Before we try to understand why they chase their tails, let’s examine why dogs have tails in the first place.

Dogs’ tails are used to show other dogs and us what they are feeling. A tail wag shows excitement or that the dog is happy to see you. A stiff tail demonstrates that the dog is tense, senses danger or is a sign of aggression. Finally, a tail between the legs shows that the dog is fearful.

One of the most important uses of a tail is that it gives dogs balance. A dog can use his tail as a sort of rudder when swimming. Like a tightrope walker, a dog adjusts his tail to better change direction or for general balance.

Why Dogs Chase Their Tails?

Now that we understand a little more about our dogs’ tails, we can begin to understand why they might want to chase them.

It could be a psychological reason that your dog is chasing his tail. Canines are sometimes predisposed with the inability to concentrate. If your dog is constantly licking his lips, barking or chasing anything that moves, he could have Canine CD.

Dogs can chase their tails if they have an itch, which can be caused by fleas, ticks or bowel irritation.

Dogs’ predatory nature sometimes forces them to “chase” anything that moves and catches their eye. If your dog sees his tail out of the corner of his eye, this may answer your question, “Why does my dog chase his tail?”

Dogs that have shown high levels of cholesterol have more sudden changes in mood or behavior and are more likely to chase their tails.

Sometimes there isn’t a real answer to, “What does it mean when a dog chases his tail?”. Dogs are a little weird sometimes, and they might just chase it for pure enjoyment.

Why do Puppies Chase Their Tails?

Puppies chase their tails for the same reasons dogs do, but also as a form of exploration. Puppies are learning and discovering many things daily, and so when they see their tail’s shadow, they may think it’s a toy, so chasing it is instinctual. Puppies chasing their tails and catching them can help them learn how big they are and distinguish themselves from a toy.

How to Stop Your Dog from Chasing its Tail

A tired dog is more likely to have a tired mind, which would prevent spontaneous acts like tail-chasing. Interaction with other dogs is another way to stimulate your dog and may decrease the likelihood of him chasing his tail.

There are some medications that your vet can prescribe to your dog to help ease his mind and make him less likely to chase his tail.

Tale of the Tail

In general, dogs chasing their tails should not be a concerning thing. Dogs are all unique, and all have different, strange and odd reasons they do the things they do. If you think your dog has a real problem, then you can talk to your vet about it and see if there is something you can do. Otherwise, get some good video and post your pup online for the world to enjoy! 😉 If you want to give your dog something else to chase and play with, check out some of these dog toys.

Why do you think your dog chases its tail?

About The Author: Ryan Rauch

Ryan Rauch graduated from Scripps School of Journalism in 2009 and has been writing for Canine Journal since 2012. Ryan enjoys writing and researching new and evolving home security measures, and has a passion for technology.