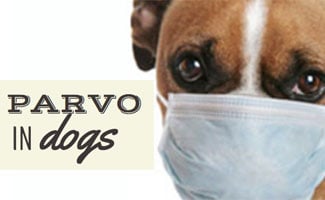 Canine parvovirus is a highly contagious virus that’s particularly prevalent in puppies. Parvo can cause severe symptoms that often lead to death if left untreated. Read on to learn more about this disease, its symptoms, how to treat it, and how to prevent its spread to other dogs.

What Is Parvo In Dogs?

Canine parvovirus is an extremely contagious viral illness that manifests itself in two different forms: cardiac and intestinal. Less common is the cardiac form, which attacks the heart muscles of neonatal puppies under 8 weeks old, often leading to death. Much more common is the intestinal form, which primarily affects puppies between the ages of six weeks and six months.

How Do Dogs Get Parvo?

Puppies can be exposed by direct contact with infected dogs or direct contact with an infected dog’s feces (e.g., sniffing, licking, stepping in, or consuming infected feces). The virus can also spread through indirect transmission in several ways: when a person who has recently handled an infected dog touches your puppy or when a puppy encounters a contaminated object, such as food and water bowls, collars and leashes, bedding, and toys. In addition, the virus can be passed from the mother to her puppies if she is infected.

As parvo is cruising around the bloodstream in the lymphocytes, it attacks places that produce rapidly-dividing cells, such as the bone marrow, which produces white blood cells. When the bone marrow becomes so damaged that it can no longer produce white blood cells, the immune system becomes weak, leaving infected puppies vulnerable to severe infection.

Parvo also attacks the small intestine. More specifically, it attacks the intestinal crypts, which are the areas in the small intestines that produce rapidly-dividing epithelial cells. The epithelial cells make up the intestinal lining, which is called the epithelium. The epithelium is a protective layer that keeps out bad bacteria, protects against fluid loss, and helps with nutrient absorption.

When the epithelium is damaged, protein and blood leak out. This can lead to several medical concerns, such as severe diarrhea, dehydration, and widespread infection. A parvo infection can also lead to sepsis, which occurs when the bacteria leaks out from the intestines and enters the bloodstream. 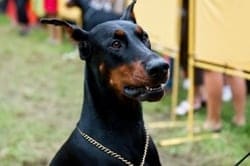 Some breeds are more prone to complications from parvovirus, including: 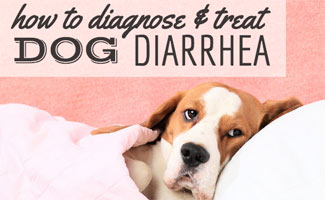 Dogs who develop intestinal parvo will show symptoms 3 to 10 days after being exposed, but a majority of adult dogs don’t ever exhibit signs. The most common symptoms in puppies include:

If you notice these symptoms, it’s important to take your dog to the vet as soon as possible because the mortality rate of untreated cases is a sobering 90%.

Intestinal parvo can damage the lining of the intestines, causing protein and blood to leak. This can lead to several medical concerns such as sepsis, anemia, the escape of endotoxins into the bloodstream, and a severe drop in white blood cells.

Your vet will diagnose parvo through symptoms, a physical examination, and blood tests to look for low white blood cell levels, which are common with parvo. They may also run a fecal canine parvovirus ELISA test.

ELISA is short for ‘enzyme-linked immunosorbent assay.’ This test uses parvovirus antibodies that will attach to parvovirus proteins, if they are present, in your dog’s feces. A color change suggests that the antibodies have attached to the proteins, indicating a positive result.

The ELISA test takes about 10 minutes to complete.

There’s no cure for parvo, so your vet will treat the symptoms your dog is suffering from during the illness. Parvo often causes puppies to get dehydrated from excessive diarrhea and vomiting. And dogs with parvo are also at a high risk of developing infections because the virus weakens the immune system.

To combat dehydration, your vet will five your pup intravenous fluids to make sure your pup is replenishing the loss of electrolytes, proteins, and fluids. Your vet may also administer an antidiarrheal medication and medications to prevent vomiting.

Parvo also lowers a dog’s white blood cell count, seriously weakening the immune system and leaving dogs susceptible to secondary bacterial infections. This is of particular concern with parvo because the virus can damage a dog’s intestinal walls, increasing the chance of infection. So your vet may also put your pup on an antibiotic to combat infections.

Many cases of parvo require hospitalization for several days. Recovery times vary based on the severity of each case, but it typically takes about 7 to 10 days for puppies to recover from parvo. The survival rate of dogs that get vet treatment is 68% to 92%. 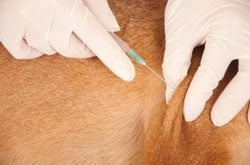 The first step in preventing parvo is vaccination, so make sure that your puppy is getting all of the recommended vaccinations from your vet. Puppies under 6 weeks of age retain immunity from their vaccinated mother because their mother passes on protective maternal antibodies. Then, they receive courses of vaccinations against parvo at approximately 6, 8, 12, and 16 weeks of age.

After this initial series of vaccinations, dogs should receive a booster parvo vaccination 1 year later, then every 3 years.

Puppies who have not yet received all three parvo shots are still very vulnerable to contracting the virus. Use extreme caution when socializing your puppy until he’s fully vaccinated. Avoid dog parks and other public areas. You can safely socialize your puppy with fully vaccinated adult dogs in a safe place like your home.

Dogs with parvo can be contagious for up to 6 weeks after the initial sign of symptoms, so isolating an infected dog is crucial. You should also consider disinfecting certain areas to help prevent the spread to other dogs.

Parvo is extremely hardy and can survive on areas infected with feces indoors for at least a month and outdoors for up to a year under the right conditions. If you’re concerned about another dog being exposed in your home or yard, use a water/bleach solution (30:1 ratio1) to wash all bedding and to clean bowls, toys, crates, collars, leashes, etc. You can also use this solution in any dog elimination area outdoors.

Here are some frequently asked questions about parvo in dogs.

Where Does Parvo Come From?

Dogs infected with parvovirus excrete it in vomit and feces.

Can I Give My Dog Parvo Treatment At Home?

Parvovirus is very serious, and you’ll need to consult your vet at the first sign of symptoms. DO NOT TRY TO TREAT PARVO AT HOME.

Can Older Dogs Get Parvo?

Yes, if an older dog is unvaccinated, he can get parvo.

Can Cats Get Parvo From Dogs?

Cats can get canine parvovirus. While it typically shows up with much milder symptoms than in dogs, there’s a mutated strain that can make cats very ill too.

Is Parvo Contagious to Humans?

Humans can’t get parvovirus from dogs.

Can A Dog Get Parvo Twice?

Once recovered, dogs are immune for several years. While possible, it’s improbable that your dog will get parvo twice.

How Many Parvo Shots Does A Puppy Need?

When following the recommendations, ideally, they will need four shots.

Parvo poop comes in the form of diarrhea, contains lots of mucus, and may or may not contain blood.

Yes, parvo can be covered through pet insurance. Here’s an example of a claim reimbursement of how one pet insurance company covered parvo.

You can learn more about what pet insurance covers here.

What Does A Vet Have To Say?

This two-minute video from WKMG News 6 in Orlando, FL, is a clip from their “Ask A Vet” segment where Dr. Nicole Greiner discusses parvo’s seriousness in dogs.

Many cases of canine parvovirus treatment require hospitalization, which means a sizable vet bill. Parvo treatment cost starts at $1,200 and can be as high as $5,000 for one puppy. Even without the need for hospitalization, the vet exam, testing, electrolyte treatment, and antibiotics can easily run into the hundreds.

You never want to be faced with the situation that your dog is suffering or could die because you can’t afford treatment. So, you may want to consider getting pet insurance as soon as possible to protect your pup from unexpected illnesses and accidents. Read our pet insurance reviews to learn more.

Is your dog showing signs of parvo or has your dog been treated for parvo?

Sally has been a writer and copy editor for Canine Journal for many years. She has 25+ years of professional writing and editing experience. She also has years of experience in public relations, marketing, and fundraising communications, specializing in health care communications. Her past work history and major freelance clients include the UVA Health System, the VCU Health System, the MCV Foundation, and various local and regional publications.

Sally holds a BA in English from James Madison University and began her writing career as a graduate student at the UNC-Chapel Hill School of Journalism & Mass Communications. She’s been researching and writing about dogs for Canine Journal since 2015, specializing in dog health articles. But she also has written extensively about dog accessories, pet insurance, training, and many other dog subjects. Her work has appeared in several notable media outlets, including The Washington Post, Entrepreneur, People, Forbes, Huffington Post, and more.

Sally has never lived in a home without pets. Now, she and her two daughters, who live in the foothills of the Blue Ridge Mountains in Virginia, are proud pet parents of all rescued pets (one dog and four cats). If they had room, there would be many more! They can’t imagine life without a home full of their fun and loving furry companions.